The Dustland
Askew ruins are standing in the vast and worn wasteland, like silent graves. Each with an unreadable epitaph of past splendor. Swirling dust is  shaping sleepy dunes between the broken moons. A steady wind blows particles against the remaining structures like sandpaper, slowly eroding the surfaces till only the barest bones remain. And beyond the horizon even less remains, till all things desintegrate into fine dust in the void.

Strap your breathing mask on, Traveller, and walk these faded roads along with usfew ragged souls. You can’t be picky about your companions anymore, my friend.
You are, step by step, drifting forward to find out what awaits you in the Dustland.
Praeludium

The Tower at the center of the slowly failing redoubt, known as the Black Bastion, has send their Seekers into the deadly Dustland. For many generations no one could find an escape from the dreadful isolation after the Starfall. Few, if any, returned from those endeavors and most of them scarred by the Blight.

But suddenly a small host of Seekers has returned from a strange place and are calling it the White Bastion. Rumors have spread fast among the the citizens. And now, after a pasage out has been found, other Factions beside the Tower started to send out their own expeditions. Countless Fortune Hunters are leaving with them, to escape the reign of the Tower. You too walks among them.

Dustland is an adventure role playing game of daring expeditions and desperate situations.

The GM is bringing the harsh, strange and derelict world to life, filling it with adventures and dangers for the characters to encounter.

The Players are taking on the roles of those half mad enough to venture out to face the Dustland, in the hope to find a better future.

The Mechanics sparked by the Resistance Toolkit written by Grant Howitt & Chris Taylor, based on their RPG Spire.

So far the main game text is finished, but only one of the character classes complete. The next update will have the game finished and maybe expanded in the future. 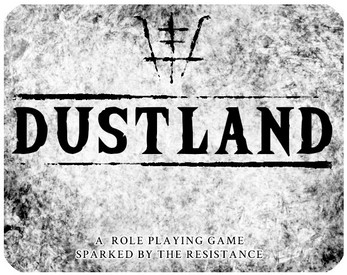 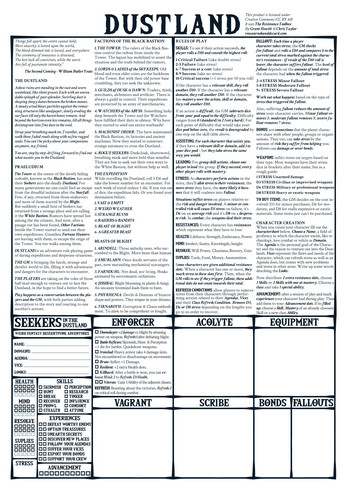 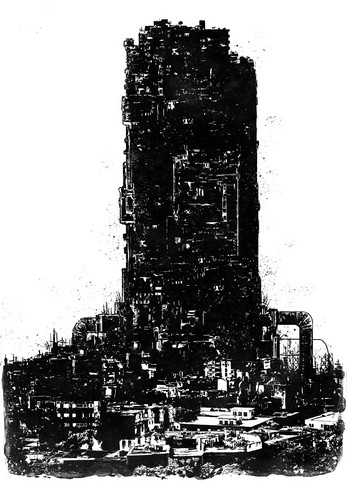